How the first mobile plate warmer was created by expert hands.

We at Caterers friend develop high quality products for food service companies. Our business philosophy is unique: we develop our own products, which are made from top quality materials to meet the highest possible safety standards.

We know first hand that the food service industry is built on passion and dedication to customer service. With our products, we want to pass on that passion directly to your customers. 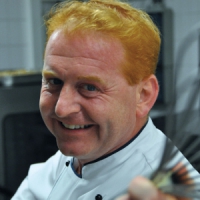 Caterers friend was founded in 2009 by Dietrich Lampe, a restaurateur and chef de cuisine from Osnabrück. He developed the first mobile plate warmer together with his friend Christian Barthold. The two friends developed this innovative product completely on their own until it was ready for mass production. Their work was rewarded with multiple awards, including the Gastro Vision Förderpreis 2010. Today, the high quality plate warmers are the flagship product of Caterers friend.

Dietrich's passion for his work in the kitchen was recognized when his “Kreishaus Restaurant” in Osnabrück received the prestigious “Goldener Kochlöffel” for the best canteen in Northern Germany. Dietrich Lampe is the managing partner of Caterers friend.

The Idea behind the Mobile Plate Warmer

Who needs a new plate warmer? Isn't the market already flooded with all possible varieties? Not quite. When working as a caterer, Dietrich Lampe often found heated trolleys to be too large and unwieldy for field use. Without an alternative, he often had to resort to serving chilly dishes on cold plates.

He quickly recognized the demand for a smaller, portable alternative to the older heating solutions. The new plate warmer should be multifunctional, easy to use, and compatible with a wide variety of plate shapes.

After Dietrich Lampe had first thought of a mobile plate warmer, he still had to work and experiment for many months before the device was ready for mass production. Dietrich tinkered around with constructions based on cooling bags, blow driers, and a variety of other mechanical devices.

Finally, a dedicated team of manufacturers created the first working prototype for the mobile plate warmer. The new device was christened with the nickname of its developer: “Meister Lampe”. After dozens of field experiments and quality tests, the device entered mass production in 2010.